There are many things shojo manga does extremely well. Crafting multi-layered characters, engrossing romances, and addictive melodrama are all staples of the best shojo on the market today. But one element that is often overlooked that stands out to me is the way shojo subtly handles the passage of time. While many shojo series seem to be stuck in the golden years of high school, several of my favorite manga take place over many years of the protagonists’ lives. This allows us to get an all-too rare glimpse at the adult phases of life – careers, marriage, and the start of a family. One of the very things I love most about Itazura na Kiss is how much time passed over the course of the series. At the start of Naoki and Kotoko’s rocky relationship, both charcaters are seniors in high school. They quickly enter college and are faced with important life decisions – especially Naoki, who despite his father’s expectations for him to take over his toy company, starts to dream of becoming a doctor. But I think watching Kotoko’s career path is even more fulfilling – because for so long in the series her attentions are only focused on Naoki. When Kotoko fails to graduate on time and considers dropping out of school, Naoki scolds her for shirking her responsibilities and never giving any serious consideration to her future, she ultimately decides to become a nurse because her dream is to help Naoki. Through the passage of time we can see the characters mature and not only overcome their foibles, but also learn how to accept responsibility.

One series in which the passage of time, especially the passing of the seasons, is especially important is Sand Chronicles. The series follows main character Ann from ages 12-26, and each chapter is given a title using the Ann’s age and what season it is (e.g.: Winter, Age 18: First Star). The seasons add to the mood and forbode important events, such as the death of Ann’s mother during the snowy winter or the end of Ann and Fuji’s relationship amidst the late fall trees. But the passage of time is most clearly represented through Ann’s hourglass, which was given to her by her mother at the beginning of the series. After her mother commits suicide, Ann breaks the hourglass, but it returns to her hands when Daigo buys her a new one because she shouldn’t ever let go of the things that are most important to her. On that day, Ann makes a wish: that she and Daigo will be together for the rest of their lives. But when Ann’s depression from her mother’s death begins to consume her, she breaks things off with Daigo and puts the hourglass away – a symbol for Ann being stuck in time. Their decision to live by the sand once Ann overcomes her depression and reconciles with Daigo is meaningful because it shows that time has started for her once more.

But series don’t need to take place over years and years to feel the passage of time. One series that makes use of a detailed account of time is Red River by Chie Shinohara. In Red River, 15-year-old Yuri Suzuki is sucked into 14th Century Anatolia. Shinohara intergrates real-life historical figures such as Kail Mursili, prince of the Hittites, and Egypt’s Nefertiti. Historically-accurate events such as the death of Zannanza (Kail’s brother and a prince of the Hittites, who became pharaoh of Egypt but was killed before he could take the throne) give me great respect for the series. But the series in which the flow of time feels the most authentic is without a doubt Nana. Cell phone conversations are given exact dates and times, enveloping the series within the real world.  Beginning at volume twelve, the series occassionally flash-forwards several years into the future, giving the audience clues of what will happen during the present. We Were There also uses this technique after it’s main couple goes their separate ways, and the audience is thrust five years into the future to figure out little by little what happened to each character. Thus, there are many interesting ways to use the passage of time within a series to make it feel unique. Overall, I think the main reason I have such a fondness for series which take place over a long portion of the cast’s lives is because it allows the audience to grow even more attached to the characters and their personal stories. Watching characters grow over a specified period of time makes them feel real, as though their stories are taking place somewhere else right as we speak.

For most fans of shojo manga, it becomes obvious that there is a golden rule:  the guy the main female character has her first kiss with is the person she’ll end up with. Whether the girl’s first kiss is accidental, forced, or (in extremely rare circumstances) consensual, eventually the heroine will start to warm up to the person who stole her lips, oftentimes because of the kiss. The fact that the main female character must always end up with the guy who stole her lips’ virginity is interesting because it shows how big of a deal first kisses are for teenage girls – not just in shojo manga, but in real-life Japanese society. Some fans may argue that because so many shojo series pair the first people to kiss each other, it makes it obvious who will end up together, which is particularly bothersome in series that center on a love triangle. Series such as Boys Over Flowers, Marmalade Boy, and Sand Chronicles all abide by the ‘first kiss’ rule.  This rule even holds true in series where the main female character originally has feelings for someone other than the person she shares her first kiss with. For example, in Peach Girl, Momo has had a crush on Toji since junior high and worries what he will think of her when rumors that she has kissed playboy Kairi start to spread. When she confronts Kairi about the rumors, Kairi decides to make the rumor true by stealing her first kiss, which she repays him for by kicking him in the groin. But over the course of the series when outside influences (mainly Momo’s frenemy Sae) tear apart her relationship with Toji, Kairi becomes Momo’s shoulder to cry on, and at the end of the series she chooses him. Yet while I’ve found that the majority of the time the first kiss rule is upheld, this rule, like all others, was meant to be broken.

In the opening scene of Red River, Yuri gets kissed by a boy she has a crush on named Satoshi, but soon after strange things start happening to her whenever she’s around water. While in the bath, Yuri gets pulled into Anatolia during the year 1500 B.C, where she becomes the concubine to Prince Kail Mursili. Yuri tries not to allow herself to fall for Kail because she knows she’s from a different world, but eventually she is able to reconcile her feelings for him, and Satoshi is long forgotten. Another series that seems to subvert the golden shojo rule is Tail of the Moon. Although I haven’t finished Tail of the Moon yet, at the beginning of the series clumsy ninja-in-training Usagi is told by her grandfather that she will marry Hanzo, a handsome ninja from another tribe. This sparks jealousy from Usagi’s childhood friend Goemon, who was told from the time Usagi was born that he would one day marry her, and it doesn’t take long for him to steal a kiss from her. However, it’s very obvious over the course of the series that Usagi’s heart is set on Hanzo, and he begins to be charmed by her cheerfulness, which makes it seem pretty clear that Goemon and Usagi won’t end up together.

The first kiss rule is also played with in interesting ways. Early on in Ouran High School Host Club, the host club attend a party where a lucky girl will be named queen of the dance and receive a kiss on the cheek from a member of the host club. After helping a female student named Ayano become closer to her crush, the host club name her queen of the party, and she chooses Haruhi to kiss her. However, Hikaru and Kaoru’s schemes cause Haruhi to slip and she accidentally kisses Ayano on the lips, thus leading to her first kiss being with a girl! Dengeki Daisy has an interesting case – because whether it adheres to the golden shojo rule or not all depends on a person’s definition of a ‘kiss.’ In volume six of the manga, Teru fights off an enemy who is after a cell phone that connects her to the mysterious hacker Daisy. Kurosaki (who is Daisy himself) rescues Teru from drowning and is forced to give her CPR. However, in volume seven Teru comes across the creepy villain Akira, who seems to take pleasure in making Teru uncomfortable. He steals Teru’s first kiss, which makes Kurosaki more upset than Teru herself. When Teru seeks Daisy’s comfort, he is unable to hide his attraction to Teru and tells her that finding out she was kissed by someone else makes him want to go give her a kiss that would make her forget about Akira’s “clumsy attempt at kissing in an instant.”  So while Akira may have officially been Teru’s first kiss, technically Kurosaki did get to have a taste of Teru’s lips before Akira, thus bringing an intriguing twist on the golden rule. Of course, there are other shojo series that are more realistic and focus on older characters such as Nana, and thus they inevitably avoid many shojo clichés including the golden shojo rule. Can you guys think of any other series where the first kiss rule was subverted? 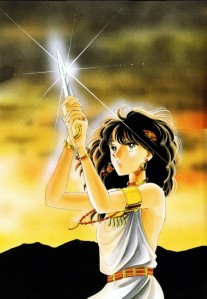 I’ve recently been reading Red River, an award-winning 28-volume shojo series known as Anatolia Story in Japan. The manga is about a girl named Yuri Suzuki, who after receiving her first kiss gets trapped in another world, which turns out to be Anatolia during the year 1500 B.C. She was summoned by Queen Nakia in order to serve as a sacrifice so Nakia would be able to kill the eldest princes, allowing her only son to become the next emperor. However, Yuri is saved by the third prince of the Hittites, Kail Mursili, and it doesn’t take long for them to fall for each other. Yuri moves into the palace as Kail’s ‘concubine,’ and she is eventually revered as the reincarnation of the goddess Ishtar. Prior to reading the manga, I had already heard that Yuri is a strong heroine, so I came into the series with high expectations. At first, Yuri bothered me a bit because she cried a lot, but as the series progressed, I came to appreciate not only how kind Yuri is but how strong she becomes. Eventually, Yuri completely won me over and I consider her to be one of the best shojo leads out there. I’m now 17 volumes into the series, so I decided to showcase some of Yuri’s greatest moments (and please be aware that there are definitely spoilers):

Yuri is commonly described as ‘little’ throughout the story because she’s much thinner and shorter than the average Hittite woman. But what Yuri lacks in size, she more than makes up for in strength, courage, and above all, heart.